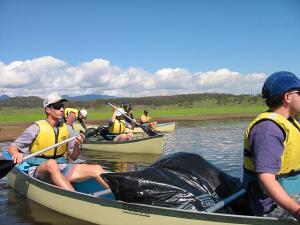 Four weeks into our exploration of leadership (and specifically ‘religious leadership’), having spend the first couple exploring definitions and understandings, and the next couple unpacking the inter-relationship between power and leadership, we come to a set of questions that have stopped me in my tracks.

And, if it does, what about ‘Christian’ leadership? What is (or can be) specifically christian about leadership?

Of course leadership has to exist. It’s in nearly every conversation about the state of the world, the state of the church, the identified solutions to all our woes. It’s a gift, a skill, an approach.

Leadership must exist, or we wouldn’t talk about it so much.

Some say leadership is the capacity to get a group of people to do something.  But maybe that’s just coersion, or inspiration or bullying. Power at work, rather than leadership.

The more I think about leadership, the more I wonder if it’s not really a skill or gift that is practiced by an individual (or group) who is “being a leader”, but is actually about the perception and experience of the follower.

If two people are looking at the same ‘leader’, one is inspired and the other left cold…in what sense is that leader genuinely offering leadership?

If two segments of our society look to the same leader, half are convinced of great, powerful, wonderful leadership, but the other half see abuse, bullying and short-sightedness….in what sense is leadership actually being offered?

What am I talking about? Clearly, I have no idea. But stay with me while I wonder aloud.

A few years ago, I worked in an outdoor education organisation.  Our stock in trade was risk.  Specifically, we put people in risky situations to help them learn something from the experience about themselves, their capacity, their group, or about leadership (yes…true!).

There is something powerful about fear, about our emotional response in situations of great risk that make those moments priceless development opportunities.

Except the reality is that we went to extraordinary lengths to make sure that the situations in which we put people weren’t really all that risky at all.

Sure, whenever you’re paddling a canoe in white water, riding a mountain bike, or abseiling off a cliff, there are some risks. But we worked hard to minimise those risks, purchasing and maintaining over-the-top safety equipment, training staff, putting in place logistics programs to make sure we were always within an acceptable risk window.

To our clients, none of that mattered. As they stood on top of a cliff about to lower themselves down, as they floated across a dam on a raft made of barrels, bamboo and bits of string, or as they camped in the wilderness in the midst of a thunderstorm…the risk seemed very real.

And therein lies the value in doing what we did, and I wonder, the connection with leadership.

Even if the real risk was low, the perception of high risk made those situations valuable teaching moments. The experience of the participant in being pushed into a heightened state of fear or emotion was completely real – even if the risk was only perceived.

Even if leadership isn’t a real thing, or at least it’s hard to put a finger on, it’s the perception of leadership that inspires, equips, enables the follower to action.

Maybe reality and perception are two sides of the same coin.

The combination of good communication, of the power of encouragement, the capacity of good systems to release resources, the inspiration that comes from an amazing idea….perhaps all these little pieces of reality are experienced or perceived as leadership.

And that might explain why one person’s leadership is another person’s frustration.  Leadership is entirely in the eye of the beholder. It’s perceived rather than real.

Even if that makes sense (and I’m not sure it does) where does that leave the concept of specifically christian leadership?

These are just some of the elements I’m wrestling with as this fascinating exploration of leadership continues.

All of this, and the title of a book we were introduced to today (“You’re the Messiah, and I should know”) reminds me of one of the funny (and bang-on) scenes from classic Monty Python movie “The Life of Brian” – where we are reminded that leadership is experienced, rather than offered. I leave you with it to ponder….  (oh, and language warning…).

NB: This is the fifth in a serious of posts reflecting on leadership, written during a Religious Leadership course with Trinity Theological College

PS> If you’re interested in this notion of risk, I once reflected on it a little more deeply:  Here and again here.

Error: Twitter did not respond. Please wait a few minutes and refresh this page.